Having trouble viewing this site? Try updating your browser to the latest version.
River Nar

The River Nar is a tributary of the River Great Ouse. It rises near Litcham in Norfolk and flows 15 miles west through Castle Acre and Narborough, joining the Ouse at King's Lynn. In 2011 the Nar was recognised by the Environment Agency as one of the top ten most improved rivers in England and Wales.

The final section of the river near its mouth was diverted northwards when the Great Ouse was re-routed to a new outfall at King's Lynn after the thirteenth century. The river was made navigable from its mouth to Narborough and probably to West Acre as a result of an Act of Parliament obtained in 1751. Ten single-gate sluices and a pen sluice (or pound lock) were used to handle the change in level. The use of the river declined rapidly after the opening of a railway from King's Lynn to Dereham between 1846 and 1848. In 1884, the river was taken over by the River Nar Drainage Board, and closed to navigation, when an un-navigable sluice was constructed to the south of a Manure Factory in King's Lynn. A new sluice very close to the junction with the Great Ouse has been built more recently.

The section of the river controlled by Nar Valley Fisheries is the north bank from the Pentney Abbey riffles downstream to the Wormegay High road bridge. This section is approximately 1.5 miles long and meanders along the boundary of the fisheries. Chub, Roach, Pike and Eels are the main targets in this area, with a small stock of trout and the regular runs of Sea trout in the spring / summer period make this a very interesting little fishery.

Over the past few years the Norfolk Rivers Trust has embarked on a campaign to enhance the habitat of the local rivers and streams to support a greater diversity and increase the numbers of native species of fish and invertabrates, etc. The trust has continued it's very successful work from the source of the River Nar to Pentney Abbey so far. We are very pleased to announce the Trust will commence work in our area from February 2015. The habitat enhancement work will include reprofiling of the banks and river bed, using Berms and large woody debris, creating gravel beds and removal of previously used installations which have passed their 'sell-by dates'. The Trust carried out an electrofishing survey in November 2014 in the area behind Dougs Lake downstream to Lake Geneva. The results were very encouraging proving we have a solid base to claim our section of the river as Trout fishery. The Chub were a little elusive but we do know we have a healthy stock to 5lb plus throughout the area for the coarse anglers.

In the image slideshow to the right you can see some of the residents of the river. 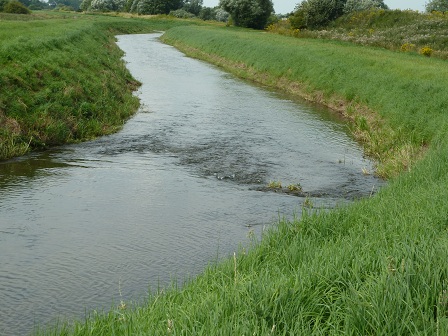